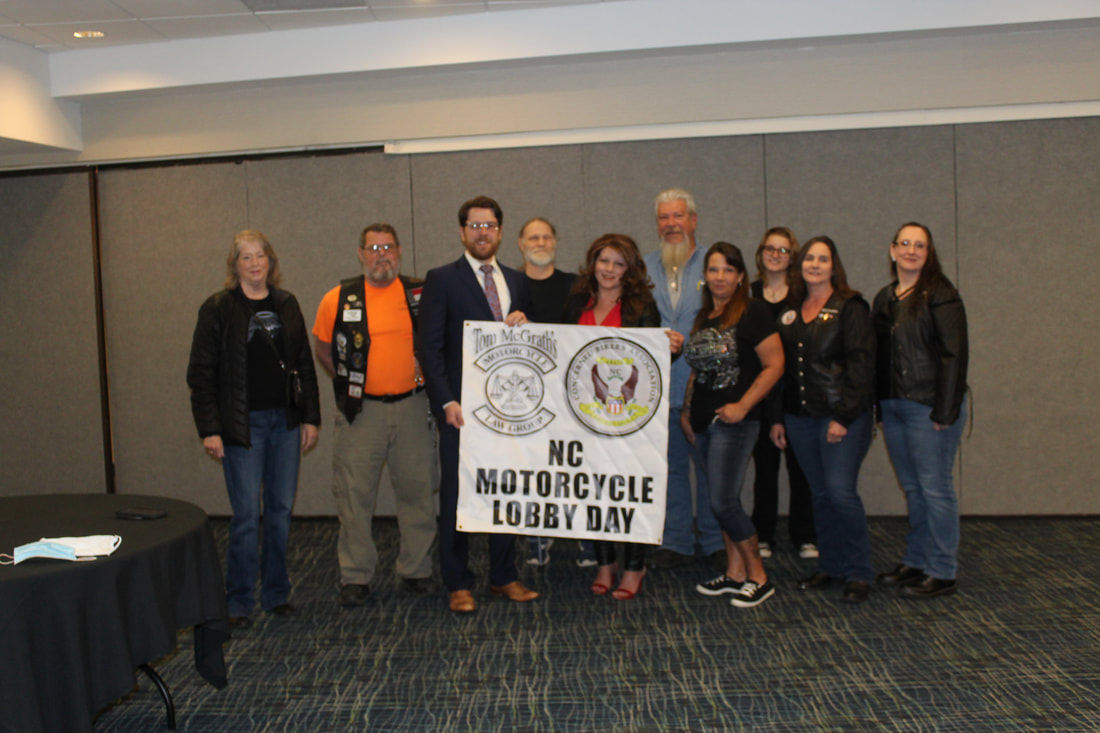 Updates will regularly be sent out through email, CBA Facebook page and other media to keep you informed of the progress of all of these legislative issues. Please pay heed to these updates and respond  with emails and phone calls to your legislators when asked to do so. Be involved. Even if you are not interested in politics, politics is interested in you and political actions affect you in many ways every day.


*H257-v-4*
AN ACT TO PERMIT THE USE OF A FACE MASK WHILE OPERATING A MOTORCYCLE.

SECTION 1.  G.S. 14-12.11 reads as rewritten: "§ 14-12.11.  Exemptions from provisions of Article. (a) The following are exempted from the provisions of G.S. 14-12.7, 14-12.8, 14-12.9, 14-12.10 and 14-12.14: (1) Any person or persons wearing traditional holiday costumes in season; (2) Any person or persons engaged in trades and employment where a mask is worn for the purpose of ensuring the physical safety of the wearer, or because of the nature of the occupation, trade or profession; (3) Any person or persons using masks in theatrical productions including use in Mardi Gras celebrations and masquerade balls; (4) Persons wearing gas masks prescribed in civil defense drills and exercises or emergencies; and (5) Any person or persons, as members or members elect of a society, order or organization, engaged in any parade, ritual, initiation, ceremony, celebration or requirement of such society, order or organization, and wearing or using any manner of costume, paraphernalia, disguise, facial makeup, hood, implement or device, whether the identity of such person or persons is concealed or not, on any public or private street, road, way or property, or in any public or private building, provided permission shall have been first obtained therefor by a representative of such society, order or organization from the governing body of the municipality in which the same takes place, or, if not in a municipality, from the board of county commissioners of the county in which the same takes place. Provided, that the provisions of this Article shall not apply to any preliminary meetings held in good faith for the purpose of organizing, promoting or forming a labor union or a local organization or subdivision of any labor union nor shall the provisions of this Article apply to any meetings held by a labor union or organization already organized, operating and functioning and holding meetings for the purpose of transacting and carrying out functions, pursuits and affairs expressly pertaining to such labor union. (b) Notwithstanding G.S. 14-12.7 and G.S. 14-12.8, a person may wear a mask for the purpose of protecting the person's head, face, or head and face, when operating a motorcycle, as defined in G.S. 20-4.01. A person wearing a mask when operating a motorcycle shall remove the mask during a traffic stop, including at a checkpoint or roadblock under G.S. 20-16.3A, or when approached by a law enforcement officer."


MOTORCYCLE BILLS IN THE NC LEGISLATURE

TO FOLLOW THE PROGRESS OF MOTORCYCLE BILLS WE HAVE INTRODUCED OR SUPPORT
, GO TO ncleg.net AND TYPE IN THE BILL #

Current Legislative Agenda:
CBA/ABATE of NC maintains a constant presence in the General Assembly (1) to protect bikers from the politicians and bureaucrats who try to impose well-meant but ill-advised, unnecessary new restrictions on people who ride motorcycles and (2) to advance the interests of the motorcycling public through the introduction of legislation and participation in the legislative process.

In the Crosshairs:  ​ On the Horizon:

Administrative Goals: These are but a few examples of what CBA/ABATE of NC is doing to protect your right to ride a motorcycle safely and in the manner you choose. Support CBA/ABATE to help it achieve its goals. Join CBA/ABATE now!

G.S. 20-4.01 (27) – GIVES DEFINITION OF AUTOCYCLE, MOTORCYCLE, MOPED, MOTOR DRIVEN BICYCLES. (d1) GIVES THE DEFINITION OF A MOPED AS A 2 OR 3 WHEELED VEHICLE WITH NO EXTERNAL SHIFTING DEVICE, A MOTOR THAT DOES NOT EXCEED 50 c/c AND CANNOT GO AT A SPEED GREATER THAN 30 MPH ON A LEVEL SURFACE

G.S. 20-7 (1) (a1) – GIVES LICENSE REQUIREMENTS FOR MOTORCYCLE AND MOPED. STATES THAT A PERSON LESS THAN 18 YEARS OF AGE WITH A M/C ENDORSEMENT MAY NOT DRIVE A MOTORCYCLE WITH A PASSENGER. ALSO STATES THAT NEITHER A DRIVER’S LICENSE NOR A M/C ENDORSEMENT IS REQUIRED TO DRIVE A MOPED.
(a2) GIVES REQUIREMENTS FOR A M/C LEARNER’S PERMIT. ALSO STATES THAT THE HOLDER OF A M/C LEARNER’S PERMIT MAY NOT RIDE WITH A PASSENGER.
(a3) STATES THAT TO DRIVE AN AUTOCYCLE, A PERSON SHALL HAVE A REGULAR DRIVER’S LICENSE.

G.S. 20-8 (7) STATES THAT ANY PERSON WHO IS AT LEAST 16 YEARS OF AGE AND WHILE OPERATING A MOPED IS EXEMPTED FROM HAVING A DRIVER’S LICENSE.

G.S. 20-10.1 STATES THAT IT SHALL BE UNLAWFUL FOR ANY PERSON WHO IS UNDER THE AGE OF 16 YEARS TO OPERATE A MOPED UPON ANY HIGHWAY OR PUBLIC VEHICULAR AREA OF THIS STATE.

G.S. 20-53.4 STATES THAT MOPEDS SHALL BE ISSUED THE SAME TYPE OF REGISTRATION CARD AND PLATE ISSUED FOR A MOTORCYCLE.

G.S. 20-140.4 THIS IS THE MANDATORY HELMET PROVISION AND NUMBER OF PASSENGERS ALLOWED. ALSO STATES THE PENALTIES FOR VIOLATION.

You can get to these statutes by going to the NC General Assembly website at www.ncleg.net. Look to the right side of the page under SHORTCUTS, GENERAL STATUTES. Under SEARCH, TYPE IN MOPED and MOTORCYCLE. You can also find on the General Assembly (ncleg.net) website who your reps are and contact info for them. Make those phone calls and send those e-mails!  Form letters don’t mean much to them, but personal emails do. Take action to restore a little bit of LIBERTY to our state.